I’ve recently launched my first Kickstarter campaign to support the creation and publication of my very first photography book! YAY! I’m so excited that after 2 days I’m already at 10% of my fundraising goal, but there is much work left to be done to raise the balance of the funding and I’ve had a few people ask me, “What’s this Kickstarter thing?” So here’s a quick rundown. 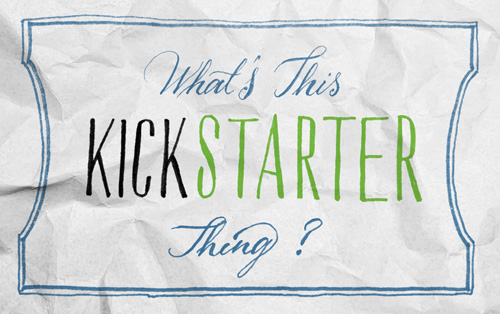 How does Kickstarter work?

Thousands of creative projects are added to Kickstarter everyday. Each project is independently created and crafted by the person behind it. Every project creator sets their project’s funding goal and deadline. If people like the project, they can pledge money to make it happen.

Are you guaranteed to get funding?

No. With Kickstarter, projects will only get funded if the total funding goal is reached. If the project succeeds in reaching its funding target, all backers’ credit cards are charged when the project reaches its deadline. If the project falls short, no one is charged and the project does not get funded.

Funding on Kickstarter is all-or-nothing.

With the all-or-nothing model, it’s important to get the momentum of the campaign rolling early so that the campaign has a chance of getting on the “Staff Picks” page of the Kickstarter website. This allows the project to get more views within the crowdfunding community, and in turn more pledges.

Remember that your credit card does not get charged unless the project succeeds. Therefore your pledge is more important at the start than it is near the end of the funding deadline so that the momentum builds for the project. 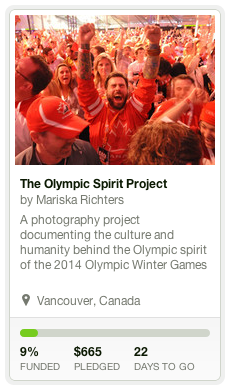 What is the Olympic Spirit Project?

The Sochi 2014 Olympics have been labeled as the most controversial and most expensive Games of our time, and I feel that the Olympic spirit has been lost for many. Some are even boycotting the Games completely.

After experiencing the Olympic energy in Vancouver in 2010 as media and again in London in 2012 as a spectator, I am inspired to recreate that feeling in Sochi this February to support our athletes (and their competitors) as they compete in the biggest competition of their lives. The athletes have worked so hard to get to this point and it’s unfair to them not to support their efforts in what for most is a once in a lifetime opportunity to represent their country.

So I came up with The Olympic Spirit Project.

The goal of this project is to get on the ground in Sochi Russia for 10 days during the 2014 Olympic Winter Games to photograph and document the Olympic spirit. I will attend both official Olympic and cultural events and photograph the different ways that cultures celebrate a win, or display their disappointment in a loss. The images I capture during my time in Sochi will be edited and compiled into the Olympic Spirit photo book, with a targeted publishing date of September 2014.

Because funding on Kickstarter is all or nothing, I need your help to get the momentum rolling on the funding campaign now. Every dollar counts! Two dollars, five dollars, twenty-five dollars, it all adds up! And please share the project with your friends and family to help spread the Olympic Spirit even further!

In exchange for your generous support, I’m offering some great rewards. From digital and hard cover copies of the finished book to the opportunity to join me at an official Olympic event during the project! And of course every backer will be acknowledged and thanked in the book itself on the Project Contributors page.

Please click the Kickstarter button below to pledge your support today!

I thank you for your generosity and support, and look forward to creating an amazing and inspiring book!

If you have any questions about either Kickstarter or the Olympic Spirit Project, please shoot me an email or leave a comment below.

Previous: Announcing the Olympic Spirit Project
Next: How to Apply for a Russian Tourist Visa