The Canadian Paralympic Committee (CPC) today announced that sledge hockey captain Jean Labonté has been selected as flag bearer for Canada at the opening ceremony of the 2010 Paralympic Winter Games in Vancouver.

“Jean has demonstrated throughout his career the determination, athletic excellence, and strong character that embodies the Paralympic spirit,” said Blair McIntosh, chef de mission, Team Canada.”  Jean is a most deserving athlete to not only captain our sledge hockey team but to also lead our entire Canadian delegation into B.C. Place for the first Paralympic Winter Games on home soil.”

The native of Gatineau, Québec has competed in three previous Paralympic Winter Games, earning a gold medal in 2006 and silver in 1998. Labonté is one of the most decorated and admired athletes in the sport, having played in five International Paralympic Committee (IPC) Sledge Hockey World Championships, taking the gold medal in 2000 and 2008, and bronze in 1996 and 2009. 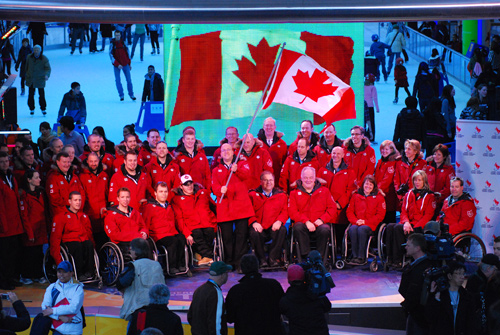 The veteran defenceman demonstrates great leadership both on and off the ice. Labonté is an outstanding ambassador for sledge hockey and for the Paralympic movement.  He has worked tirelessly to promote Paralympic sport across Canada, educating Canadians about sport for athletes with a disability, and encouraging young and old to participate and take advantage of sporting and volunteering opportunities in their communities.

“When the eyes of the world focus on B.C. Place for the opening ceremony of the Vancouver 2010 Paralympic Winter Games – the first to be hosted in Canada, they will witness an historic moment in Canadian sport,” said Carla Qualtrough, president, CPC. “The profile of Paralympic sport has reached new heights and our flag bearer, Jean Labonté, has helped lead the way. It is a tremendous honour to carry the flag for your country. Jean, like all of our Paralympic athletes, is about to make Canada very proud.”

The Opening Ceremony of the 10th Paralympic Winter Games is scheduled for 6pm PT on Friday, March 12, 2010 at BC Place in Vancouver.

About the Canadian Paralympic Committee